I often wonder what Stamford Raffles’ first impression of Singapore was. Exasperation was mine as the oppressive humidity wilted my passport into my hand upon exiting the aircraft.

Stamford Raffles’ arrival in 1819 marked the beginning of Singapore as a trading base due to its position at the crossroads of international shipping routes. 200 years later, it remains one of the world’s top trading zones and is now a popular layover on Europe to Australia/New Zealand air routes.

Here I will outline the top things to do if you only have one day in Singapore on your layover.

ONE DAY IN SINGAPORE: ITINERARY

VISIT RAFFLES HOTEL: Singapore’s British historical connections are well preserved with Raffles Hotel as the focal point. It’s one of the world’s great hotels, its colonial past oozing from the walls. Not only is the interior one of perfectly preserved glamour but the gardens and courtyards summon up all that past allure.

And it was here in the Long Bar of Raffles Hotel that the gin-based Singapore Sling cocktail was created in the early part of the 20th century. Expect to pay a phenomenal price for one at the bar.

SIGHT-SEE IN PADANG AREA: South of Raffles Hotel lies the Padang, a field where various colonial sports were hosted down through the years. Today anyone can stroll through the field.

At the south end of the Padang lies Singapore Cricket Club, a distinctive building that combines British architecture with local resources. At the south west side you will find the National Gallery of Singapore.

Around the Padang area lie more colonial buildings such as the Victoria Theatre and Concert Hall, and the Arts House.

CHILL OUT IN FORT CANNING PARK: While Singapore is highly urbanised, public parks are numerous. Another memorable place on my trip was Fort Canning Park, a public park west of the Padang area bordering Orchard Road.

The park has historical significance, serving as the HQ for the British Far East Command and being the site where Singapore surrendered to the Japanese in World War II. Nowadays, it’s used for public recreation and chilling out.

SHOP ON ORCHARD ROAD: I suppose I cannot publish a post about Singapore without elaborating on Orchard Road, one of the world’s great shopping precincts. Unlike other famous shopping streets I could actually afford some of the wares on offer such is the diverse variety of retail outlets.

However, my favourite Orchard Road purchases were in fact the most inexpensive, that being the ice-creams sold by the street vendors. I have no doubt the humidity was a factor in my purchases.

CHINATOWN: Singapore is a delightfully muticultural society with the majority of Singaporeans of Chinese ethnicity. As a result, its Chinatown area is a pulsating district, comprising of a myriad of roads, shops, eateries and bustling markets, all dwarfed by surrounding skyscrapers. The Hong Lim Market and Food Centre is even recommended by the Michelin Guide.

Singapore celebrates its diverse culture and heritage through the various houses of worship and heritage centres around the city state but a number are located in the Chinatown area.

NIGHT-TIME MERRIMENT: Also dwarfed by skyscrapers are the bars and restaurants of Boat Quay and Clarke Quay, two of my favourite places in Singapore where many a night I soaked up the spirit of this well-known area.

I also recommend a rooftop bar experience. I chilled on top of the Hilton Hotel but this article by Time Out lists some other great rooftop bars.

IS SINGAPORE WORTH A STOPOVER?

I’m often asked by Australia-bound friends and acquaintances if Singapore is worth a stopover. Absolutely yes. Singapore is one of the safest and cleanest countries in the world. It may be densely populated but public transport is outstanding.

Singapore has a progressive and creative inclination, and is a multicultural melting pot constantly realising its dreams. It also makes my Best Solo Female Travel Destinations list.

If you’re staying more than one day in Singapore, add the Marina Bay area to the above itinerary. The famous Gardens by the Bay public gardens and iconic Marina Bay Sands Hotel are located in this area.

Singapore’s Changi Airport is considered one of the best airports in the world. Its website outlines how visitors can get to the city and other parts of the island. However, your airline may include a complimentary hotel shuttle in the stopover package.

Singapore’s MRT system is an overground/underground light rail system that is outstanding in service. The Visit Singapore website outlines the other public transport options available. 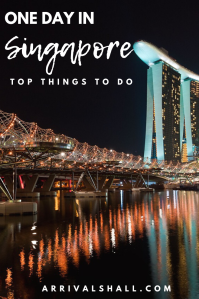 4 thoughts on “One Day in Singapore: Top Things to Do”