Visitors to Ireland may notice that all mainline stations in cities and large towns are named after people, more specifically, the executed leaders of the 1916 Easter Rising, an armed rebellion prior to our War of Independence from Britain (1919-1921).

The Easter Rising only lasted a few days and was a military disaster for its proponents but its legacy was immense, swaying public opinion towards complete independence and leaving us with the Proclamation, the egalitarian statement of principles which independent Ireland is still aspiring to.

Whilst the Easter Rising took place predominantly in Dublin, events in Kerry were the starting point for the rebellion.

Sir Roger Casement was a Dublin-born British diplomat and human rights campaigner who challenged the social injustices of colonialism around the world. Upon retirement he turned his attention to colonial abuses in his own land and became involved in the Irish nationalist cause, travelling to Germany for help to support independence.

A German shipment of arms arrived off the Kerry coast on Holy Thursday night, 20th April 1916, disguised as a Norwegian fishing vessel and named the Aud.

Casement travelled from Germany on a submarine and came ashore on Banna Strand in North Kerry with two others, Daniel Bailey and Robert Monteith. The Aud arrived prematurely and was intercepted whilst an ill Casement remained in the Banna area and was later arrested.

He was transferred to London where he was found guilty of High Treason and hanged in Pentonville Prison on 3rd August 1916, the last of the 1916 leaders to be executed and the only one who had a public trial. Casement’s efforts of furthering Irish independence are commemorated at Banna Strand, outside Ardfert in North Kerry.

Further information on the North Kerry area can be found on my Wild Atlantic Way Great Tour of North Kerry post.

The other significant Kerry-based Rising event occurred at Ballykissane Pier outside Killorglin in Mid-Kerry. On Good Friday, 21st April 1916, five men arrived in Killarney via train from Dublin with the wireless communications station on Valentia Island their final destination. The task of Con Keating, Charles Monahan, Donal Sheehan, Denis Daly and Colm O’Lochlainn was to get hold of a portable radio unit to warn the Aud not to land until Easter Sunday.

The men travelled towards South Kerry in two cars with the vehicles becoming separated en route through a series of mishaps. The second car carrying Keating, Monahan, Sheehan and driver Thomas McInerney took a wrong turn in Killorglin and headed straight towards Ballykissane pier where their car entered the River Laune. Only McInerney survived. Their operation failed and the British Navy captured the Aud. 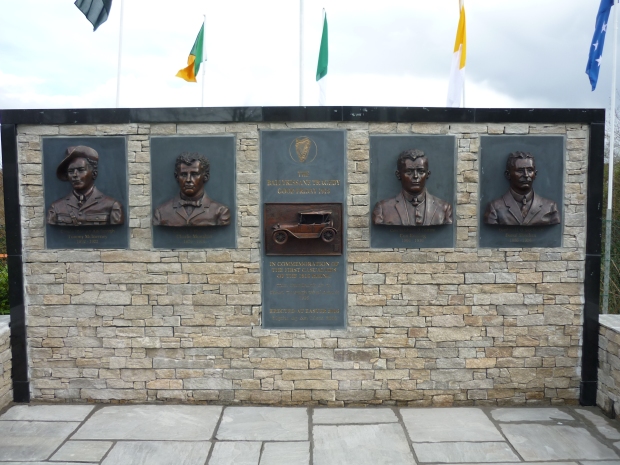 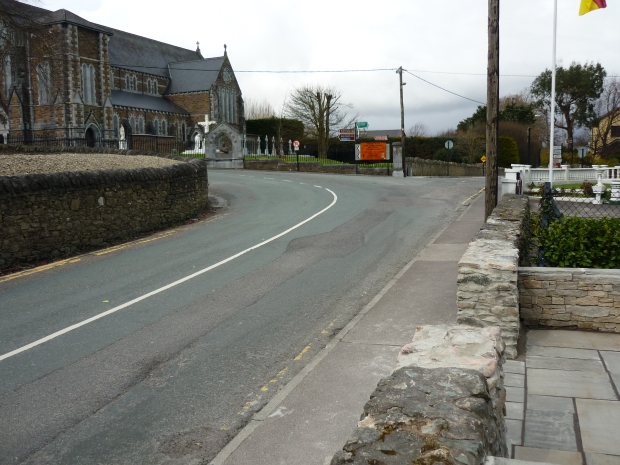 Killorglin: Road on left leads to Cahersiveen. Road to the right of the orange sign leads to Ballykissane Pier. 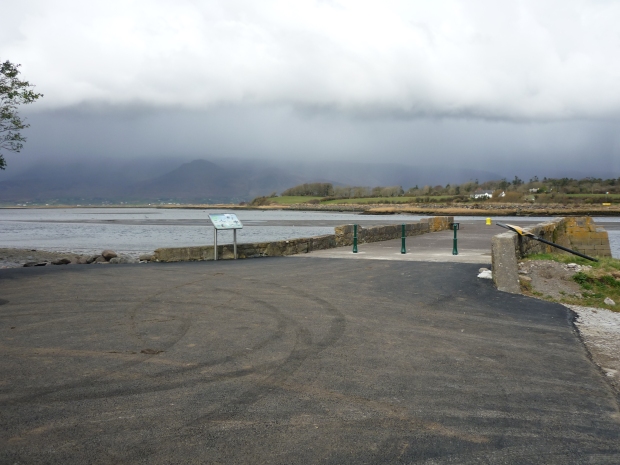 The rebellion operation in Dublin was unsuccessful with the leaders surrendering on Saturday 29th April. All but one of the Rising’s leaders were subsequently court-martialled and executed by firing squad whilst thousands of people unconnected with the Rising were interned without trial in prison camps.

Many events took place to commemorate the centenary of the Easter Rising including a Full State Ceremony at Banna Strand. As part of the 50th anniversary commemorations in 1966 the State renamed the mainline railway stations in honour of the leaders. Further information on the 1916 Easter Rising can be found on Joan O’Reilly’s Simplified History site.

So it’s only fitting that I finish this post with the list of rebellion leaders and their respective railway stations.

Seven Signatories of the Proclamation: