Friends consider Munich my spiritual home on the basis of the punctuality and organisation of public transport along with the city’s strong sporting traditions and plentiful supply of BMWs. They know me too well.

I combined my Munich sights trip with a stay in Salzburg, visiting the Austrian city first and returning to Munich by train days later. Munich Hauptbahnhof (main railway station) is an experience, one where I struggled to find the exit out of. According to online reviews, the station’s frequent renovations test the navigational skills of most visitors.

Munich’s high cost of accommodation – the city’s one and only drawback – forced me to choose a miniscule room in a hotel near the Hauptbahnhof, an area which happens to be the Red Light District. Online reviews prior to visiting deemed the area safe and that was my experience as well.

My minuscule room cost €81.50 a night and was so small that I could touch the two main walls upon extending my hands from the centre of the room. On the plus side, the bed was comfortable, the room was warm and the staff very helpful and friendly. Thankfully, Munich is such an engaging city, the room was used only for sleep.

On the flight to Munich, I picked up some shopping and dining tips by eavesdropping, not by choice, on what I thought was a boisterous Cork hen and stag party which eventually transpired to be a public service study group.

As soon as I dropped my bag off at Hotel Box Room I made use of the public servants’ chattering by hitting the pedestrian shopping streets of Neuhauser Strasse and Kaufingerstrasse. I passed under the Karlstor arch, the remnants of the medieval city wall located between Karlsplatz and Neuhauser Strasse which marks the westernmost point of the Altstadt (Old Town).

Approximately 1km east of Karlstor is Marienplatz, the centre of the Altstadt. The feature building in this square is the Neus Rathaus (New Town Hall), a 19th-Century Gothic-style construct with intricate external features and a distinctive grey facade. Munich does many things well and architecture is one of them to the point that I abandoned shopping plans and simply rambled aimlessly throughout the Altstadt admiring the craft of Bavaria’s bygone builders.

Another structure which made a significant impression on me was the Feldherrnhalle, an 18th Century Italian-inspired commemoration to the Bavarian Army and site of a tragic riot between the Bavarian Police and Hitler’s follower’s in 1923, leading to the imprisonment of the Nazi leader.

I don’t drink beer nor does the sight of a dirndl-clad beer maid excite me so I knew the Hofbrauhaus wouldn’t be my scene but one can’t come to Munich and not visit.

My scene lay north of the Altstadt beside Olympiazentrum underground station on the U3 line. Here I indulged my sporty side and visited the Olympic Park.

Constructed for the 1972 Olympics with subsequent public use in mind, it continues to be frequented by Munich residents whilst the main stadium, built in a crater formed from WWII bombing, was home to Bayern Munich FC until 2006. The tent-like membrane roof of several of its venues is said to mimic the nearby Alps.

It’s both a pleasant and impressive park and I was delighted to gain access to the swimming pool arena where Mark Spitz, star of the 1972 games, won his seven gold medals. 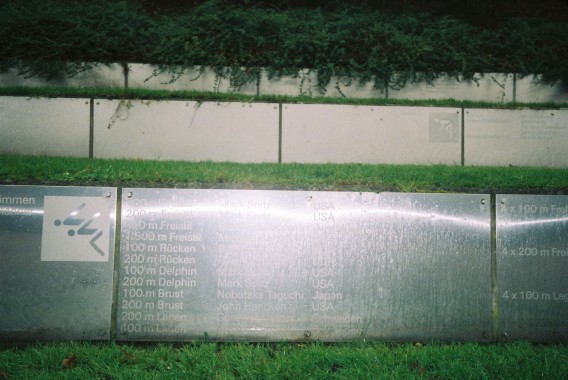 One of the many plaques listing the Olympic winners.

Despite Munich’s impressive architecture and rich history, the site which I relished visiting the most was the BMW complex. Located beside the Olympic Park it comprises of the company’s headquarters and manufacturing plant, the BMW Museum and BMW Welt (BMW World).

I started at the BMW Museum, located in a temporary structure at the time of visit, which showcased its cars from the early 20th Century onwards. Whilst I love and appreciate the beauty of these mechanical beasts, I know very little of their inner workings. Thankfully, a native German motoring enthusiast was willing to educate me.

And it’s this willingness to share knowledge, stemming from a well-placed national pride in product, which is something I’ve come to love about Germany. It’s a country where everything works and, in a way, serves as an antidote to Ireland’s organisational shortcomings. 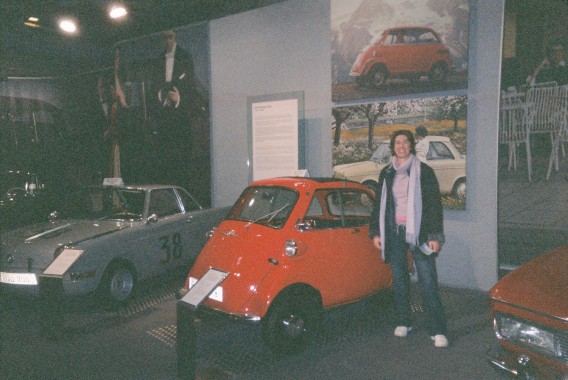 Beaming smile in the BMW Museum

Regrettably, I didn’t visit BMW HQ and take a tour of the manufacturing plant. Designed like a four-cylinder car part, the HQ building is one of the most distinctive structures in the world. Instead, I spent the time visiting BMW Welt: a futuristic showroom for new products, a contact point for customers and an experience of utopian proportions for those of us who only dream of owning a BMW.

Over-awed with the environs, I rested on the floor in a quiet corner with my hand clasped to my chest looking more like a heart attack victim than a fan of the luxury brand who was having a celestial experience. 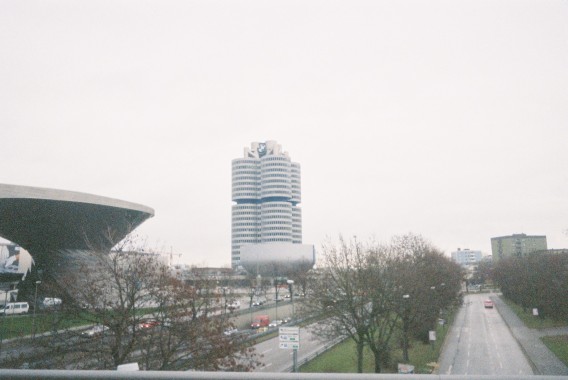 BMW HQ with BMW Welt on the left

Munich was a marvellous introduction to a country I’ve grown fond of, a country which forges ahead technologically without losing sight of its traditions. I’ve a tendency to allow too little time on visits to Germany and my trip to see Munich sights was no different, which means a return visit is inevitable.

It’s my dream to drive around Germany using car brands specific to the regions. So in the future, if you see a woman driving a BMW in an absolute state of bliss in the federal state of Bavaria, then you know one woman is living her dream.

Like all German cities Munich has an excellent public transport system. For more details check out the MVV website. Munich has two airports. Munich Airport (Flughafen München Franz Josef Strauss) is the main airport located 28km north of the city and is one of Europe’s busiest. Trains and buses run between Munich city and Munich Airport. Memmingen Airport (Allgäu Airport) is located 110km west of Munich and is served by low-cost airlines such as Ryanair. The Allgäu Airport Express bus travels between Munich central station and this airport.

For further information on travel in Germany check out my Germany Travel Tips post.

Writing from the perspective of a solo female traveller, my blogging philosophy is to inspire, educate and entertain. I don't consider myself an influencer but an observer bearing witness to places, people and their stories. I also encourage people to visit County Kerry, my beautiful home county, in Ireland as well.