Chatting with locals was one of the main activities I undertook during my visit to Iran. Not only did I engage in the usual holiday small talk but I found it surprisingly easy to discuss matters of a political nature. Perhaps people were keen to show that their reality inside Iran differed greatly from the misconstrued international public perception of them.

Azadi Tower, a landmark of Tehran

My conversations were limited to English-speaking Iranians in four locations (Tehran, Isfahan, Yazd and Shiraz).

I’ve divided this post into Iranian people’s view of other countries (Foreign Affairs) and their thoughts on national matters (Local Affairs). Here’s what I garnered.

USA: Probably the country Iran has the most contentious relationship with and the country Iranians were most eager to talk about. First, some history. US-Iranian political animosity began in 1953 when a CIA and MI6 coup ousted Mohammad Mosaddegh, the democratically-elected Prime Minister of Iran. Mosaddegh had planned to nationalise Iran’s oil industry. The US-backed Shah, Mohammad Reza Pahlavi, took power.

The Shah was overthrown in the Iranian Revolution of 1979 when Ayatollah Khomeini returned from exile to become Iran’s Supreme Leader. Later that year, protesters stormed the US Embassy in Tehran and held 52 US diplomats hostage until 1981. US sanctions of various forms have been in place since then.

A brief respite in difficulties came in the form of the JPCOA nuclear agreement during the second Obama administration. However, the hard work of all parties in securing this agreement appears to have been undone by the Trump administration.

Apart from Barack Obama and his administration, Iranian people expressed frustration with the policies of every US President since Dwight Eisenhower. That shouldn’t be a surprise given the history between the two countries. Donald Trump’s views on women and minorities appalled Iranians I spoke to.

What was surprising was the goodwill and admiration Iranian people have for American people. I didn’t ask whether this has always been the case but Tuesday 11th September 2001 continually kept coming up in conversations. People I spoke to, who remember the date, were horrified at the act of terror they saw unfolding in New York as two planes crashed into the twin towers of the World Trade Centre. They watched in disbelief as the Pentagon was also targeted.

Immediately we knew who did it and we knew the American people were in trouble said one lady. Killing people on planes going on holiday and killing people in buildings going to work. People like you and me. Crazy, crazy declared one man. If al-Queda can strike the country with the biggest army in the world then this is a big problem for every country. Nobody is safe said another man. Media reports showed Iranians holding candlelit vigils for the 9/11 victims at the time. A number of people I spoke to in Tehran confirmed this.

Since the time of the ancient Silk Road, Iranians have been traders. Being business people at heart, Iranians have a great admiration for US citizens who have achieved commercial success. Iranians also have an admiration for the high output of cultural creativeness and technological advancements that emanate from the US and its ability to market these to a worldwide audience.

Iranians would love to see more tourists from the US visit. Pretty much every Iranian I spoke to is open to trading with the US. The iPhone’s loss in Iran is the Samsung Galaxy’s gain.

Israel: Iranian governments don’t recognise the State of Israel but the Iranians I spoke to do. They see a two-state Israel/Palestine solution as the best way of resolving issues in the region. There was universal acknowledgement that current US support for Netanyahu government policy in this respect was not helping matters.

In 2005, the then Iranian President Mahmoud Ahmadinejad threatened to wipe Israel off the map, a statement that every Iranian I spoke to considered an act of madness. Locals told me that Iran has a small Jewish community that has the freedom to practice its faith and live as part of the wider community. Have a look at this article by Deutsche Welle on Iran’s Jewish minority.

Saudi Arabia: Iranians share their government’s deep mistrust of Saudi Arabia. Firstly, they consider Saudi Wahhabism as an extremist movement that has sullied the name of Islam. They kept reminding me that 15 of the 19 September 11th hijackers were Saudi citizens. Secondly, Saudi’s mistreatment of Shia Muslims angers them. Finally, they fear a Saudi attack on Iran particularly since the US sold $110bn worth of arms to the Saudi kingdom recently. 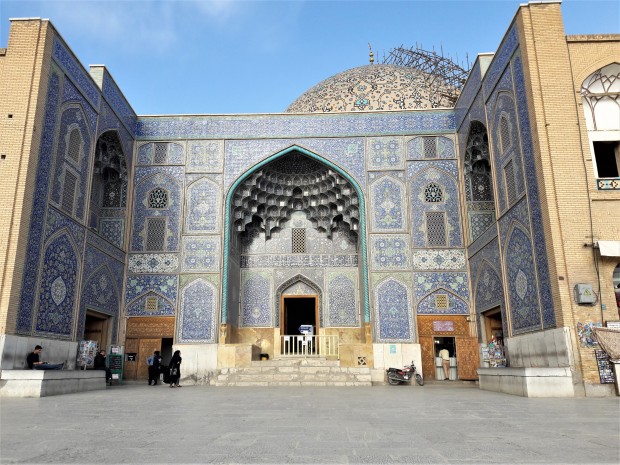 Russia: When I travelled the Georgian Military Highway I saw plenty of Iranian-registered trucks heading towards the Russian border. Since then I’ve been wondering what Iran has that Russia hasn’t.

International relations between Iran and Russia were good when I visited and this was reflected in people’s viewpoint of Russia as a superpower they could trust. Iranians consider Vladimir Putin the shrewdest world leader of current times and a man not to be messed with. But they have faith in their government and the Ayatollah in dealing with him.

China: The views on China were very similar to the Russia experience. As the Trump administration has undermined confidence in the US, Iranians are now looking to China for technological advancements.

UK: Of all the countries discussed, viewpoints of the UK varied widely. The countries have had a frosty relationship since 1979 although the JPCOA agreement resulted in a slight thaw. Some Iranians were never going to forgive the UK for MI6’s role in the 1953 coup while others were wary due to Britain’s centuries-old presence in Persia, a presence which hasn’t always worked out in the local’s favour. What trust the JPCOA agreement built between the two countries was being eroded by the Brexit debacle.

In 1981, Winston Churchill Street in Tehran (location of the British Embassy) was re-named Bobby Sands Street in honour of the IRA hunger-striker turned parliamentarian, a move which was designed to infuriate the British (It succeeded).

EU: There was universal trust and respect for the European Union. Iranians want the EU to play a greater role in world affairs than it already does. As an EU citizen, I experienced no animosity in Iran and neither did any other EU traveller I met. Of all the EU countries discussed, Germany stood out as a country that Iranians have a great admiration for.

Religion: As an Islamic Republic, religion plays a huge role in official Iranian affairs. Iranian people are portrayed as conservative and intolerant of other faiths but this perception is far from the reality I experienced.

Firstly, I’m not Muslim but yet I was welcomed into mosques, with attendants more than helpful in kitting me out in a chador where required or facilitating me in any other way. Much of the conversation I had with Iranian people took place in and around mosques.

I found Iranians to be tolerant of other religions. They were respectful and understanding of a person’s choice of religion and equally respectful of those who choose not to follow any. In fact, the average Irish person could take a leaf out of the average Iranian person’s book of religious tolerance.

Treatment of specific sections of society: This is where the viewpoint of Iranian people differed the greatest from the official government stance. Women do not have the same legal rights as men. In reality, the Iranian men and women I spoke to see each other as equals and hope the government will one day do the same.

Sign on the platform of Tehran’s metro stations indicating the women-only part. Women-only carriages are aligned to stop at these sections.

As for LGBT rights in Iran, there are none. Homosexuality is punishable by death. In reality, the few Iranians I spoke to on the topic were tolerant of the LGBT community. A gay male Italian couple I met said accommodation providers were discreet and accommodated them as best they could within official constraints.

People from neighbouring countries have sought refuge in Iran from violence in their own countries. According to the UNHCR there are 3 million Afghan refugees in Iran. Iranians were welcoming of refugees although feared that ISIS extremists may be amongst the many genuine applications.

Politics: Since 1979, the Supreme Leader (currently Ayatollah Khamenei) rules over pretty much everything. He chooses the Guardian Council who in turn choose presidential candidates. Presidential and civil appointments need to be signed off by the Supreme Leader as do changes in laws and budget approvals.

Most of the Iranian people I spoke to do not want regime change but want the current system of governance tweaked. Nobody rejected the position of the Ayatollah as Supreme Leader but want the elected President to have more executive administrative powers in the same way governments in other countries do. 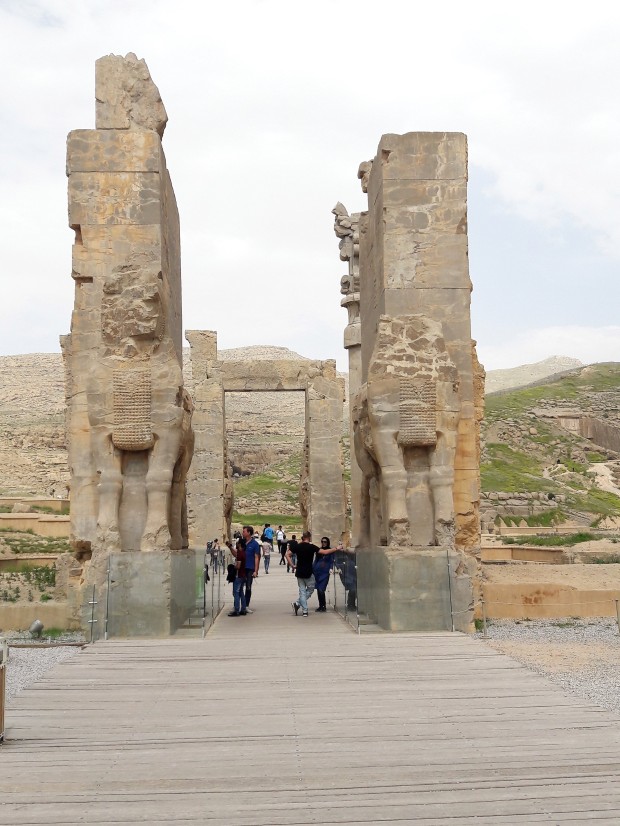 Gate of all Lands at Persepolis, the ceremonial capital of the Achaemenid Empire, an ancient Iranian empire founded by Cyrus the Great. The gate is also known as the Gate of all Nations and the Gate of Xerxes

Most people expressed satisfaction with the Iranian parliament but envied the Irish constitutional amendment process – We hold referendums to change our constitution. Iranians were gobsmacked at the Irish ease of access to parliamentary representatives.

Satisfaction with President Hassan Rouhani was linked to economic performance. Some people blamed him for Iran’s economic woes, some solely blamed US sanctions while others blamed a combination of both. Few rated former president Mahmoud Ahmadinejad highly with one person calling him the Donald Trump of Iran.

The rise of ISIS and associated extremists is the greatest fear of the people I spoke to. People explained that such groups have existed since the time of the Muhammad and are as much of a scourge to Muslims as they are to the non-Muslim world. This is why the September 11th terrorist attacks resonated so much with the Iranian people. Extremism is also why the people I spoke to are happy to trade certain freedoms for security assurances. This article from Newsweek reflects the fears of Iranian people.

Security of natural resources is also a huge concern for Iranians. Iran has the second-largest gas reserves and fourth-largest oil reserves in the world.

Many people will not visit specific countries either by choice or as advised by their government. For some countries there are ethical considerations. Without experiencing the average person’s viewpoint first-hand, we are all susceptible to absorbing a biased agenda about a country and its people. Travel facilitates the first-hand viewpoint.

In the absence of being able to visit Iran, I hope this post gives you an idea of how people inside Iran are concerned with the everyday matters such as earning a living, raising a family etc rather than causing world disorder. Mark Twain once said that travel is fatal to prejudice, bigotry and narrow-mindedness. Here’s to hoping I’ve done that travelling for you.