A wheel loader filling a truck-trailer with snow on 5th Avenue was my first experience of Manhattan, an experience far from the vision of the borough that TV show Sex and the City had ever portrayed. Yet it was this same snow that handed me one of the most unforgettable travel experiences of a lifetime: participation in the New York City Saint Patrick’s Day Parade. 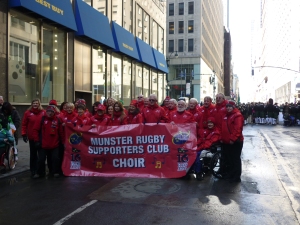 The Munster Rugby Supporters Club (MRSC) Choir, which my sister is a part of, was invited to participate in the New York City Saint Patrick’s Day Parade. Excitement abounded until she slipped on compacted snow a few hours after arrival. That night, we were due to meet with the Mayor of Kerry but the inclement weather curtailed his travel plans. Struggling with a swollen knee during our trip to Ellis Island participation in the parade became a tall physical ask for my sister. Unwilling to field an uneven number for the parade I was drafted in as substitute. I was sporting a respiratory illness but thankfully, by parade day, I was match fit.

As per parade instructions, we gathered on East 44th Street between 5th and Madison Avenues in the freezing cold accompanied by members of An Garda Síochána who were in New York as guests of the NYPD. The long wait for our turn was occupied with photo opportunities for onlookers and a press interview with video journalist Seán Mac an tSíthigh whose coverage of us made the evening news in Ireland.

An hour later we found ourselves parading up 5th Avenue passing iconic landmarks such as the New York Public Library, Saks department store and St. Patrick’s Cathedral on the two mile stretch of the parade. Walking past Trump Tower was an interesting experience given the political climate. 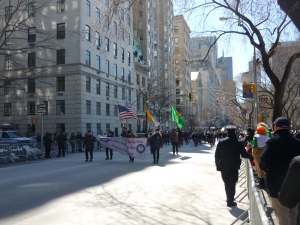 Cheering on the other parade participants

At the point where Central Park meets 5th Avenue a group were walking the wrong way into the parade but on closer inspection discovered it was the then Irish Taoiseach, Enda Kenny, on his way to meet billionaire Michael Bloomberg, former New York City mayor.

Despite the bitterly cold wind sweeping through Manhattan the continuous fanfare of the parade participants and encouraging cheers from the thousands of onlookers was all the warmth we needed. At the finish near 79th Street we got an opportunity to cheer on those in the parade behind us.

We couldn’t linger as our group were invited to a private party half-way down 5th Avenue. We re-traced our parade tracks down Madison Avenue to arrive at a function where I really did feel like fictional New York TV character Carrie Bradshaw. Food and drink flowed and the view of the parade was spectacular. Whilst the party’s excellent R&B band took a break, the MRSC Choir and a Pipe Band took up the music mantle, taking us from Across 110th Street to the Fields of Athenry in a short afternoon.

Once again, our schedule didn’t allow us to linger as our next port of call was the Consulate General of Ireland on Park Avenue where the Choir had a performance to deliver. Again, food and drink flowed easily amongst a celebrity crowd which included Minister Joe McHugh, Senator Mark Daly, and fashion designer Don O’Neill and his husband Pascal Guillermie. Don’s cousin is a work colleague of mine proving that, despite New York’s size, the world really is a small place! 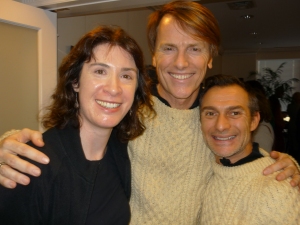 A big thanks to the members of the MRSC Choir who made arrangements from the Irish side of the Atlantic and to MRSC USA who assisted with plans along with dispensing a warm welcome. Not only was the New York City Saint Patrick’s Day Parade experience unforgettable but an absolute privilege to boot. And all I had to do was turn up at Shannon Airport with my passport and warm clothes!

The parade’s logistics are incredible. In a nutshell, in excess of 100,000 participants spend a day walking down the busiest street in one of the world’s largest cities cheered on by over 2 million well-wishers! It’s a colossal undertaking by the Parade organisers and the City of New York government, and to them I would also like to extend my thanks.

Singing at the consulate

The New York City Saint Patrick’s Day Parade is a tradition dating back to 1762 when Irish immigrants were free to celebrate their ethnicity, something which wasn’t possible in colonised Ireland. This celebration of self-expression is something every human can identify with which is perhaps why St. Patrick’s Day is celebrated throughout the world. The ethnic and racial diversity of onlookers who cheered us on 5th Avenue would also support that theory. Either that or us Irish happen to hold the best parties on 17th March!

General travel information on this vast country can be found on my Things to Know before Visiting America post.

We flew with Aer Lingus from Shannon to JFK Airport. We stayed at Radio City Apartments in Manhattan.