2012 saw the publication of Atlas of the Great Irish Famine edited by John Crowley, William J Smyth and Mike Murphy. This colossal book is a compilation of maps, case studies, essays, photographs and other primary sources which aim to represent and understand the experiences and outcomes of the Irish population who survived, perished or emigrated during this turbulent period.

The book also explores the consequences of the Famine, the actions of the administrative powers and the role of writers and artists as witnesses.

The book has contributions from a variety of experts in areas such as history, folklore, the arts and archaeology to name a few in order to explore the diverse perspectives required to study such a seismic event.

In 2013, two of the book’s editors, William J Smyth and Mike Murphy, along with contributor and Schindler’s Ark author Thomas Keneally and local Kerry historian Kay Caball, took part in an event entitled Mapping the Irish Famine. This event at Listowel Writers Week was part of The Gathering celebrations exploring Ireland’s past. The event was facilitated by Kerry Archivist Michael Lynch.

Discover more about Listowel and its surroundings in my Wild Atlantic Way: Tour of North Kerry post while more of the county is covered in my Kerry Travel Guide.

Kay kicked off the session by looking at the Famine in Kerry recounting specific incidences and population statistics from the county. She highlighted the need for teaching schoolchildren about the Famine in their locality along with studying the general situation as the outcomes and effects differed from parish to parish.

Next up was William J Smyth who delivered an unambiguous series of truths from the research. He described the Famine as the “most violent and traumatic time in Ireland since the Cromwellian era” and the fact that “we have never transcended the repetition of emigration” has to be one of the major legacies of this terrible event.

He drew correlations between the Famine and the 2008 recession stating that it appears we replaced Westminster with Frankfurt. As I outline in my Irish Food History post, Ireland was, and continues to be, a verdant country well capable of producing food. The failings in the Famine lay in the political not the horticultural.

Mike Murphy, a cartographer, spoke briefly on the data-gathering process and the task involved in producing the various maps. The final speaker, Thomas Keneally, spoke about the similarities between famines but highlighted their differing effects. His contribution to the Atlas of the Great Irish Famine concerns emigration to Australia including the concept of ‘Bounty Immigration’.

The discussion was opened to the floor with a variety of perspectives explored. John Mitchel’s exposé of the relationship between language and power was discussed with examples of political terminology having no empathy or sympathy for starving tenants.

It was mentioned that the Church increased its influence during the Famine with the book citing the increasing number of vocations as the population decreased.

Kay stated that the Famine didn’t impact greatly on the physical health of the post-Famine population. But it is obvious from the Listowel event and from the book that the psychological effects of the Famine need to be explored more.

According to the book “many witnessed and/or committed terrible deeds to carry on” living in such adverse conditions and suggests that the shame and guilt surrounding such events has led to much silence. I’m left wondering whether this enforced ‘survival of the fittest’ was the genesis of our ‘mé féin’ attitude?

The book says the Famine broke the self-confidence of the nation but questions why it took so long for the country to recover. It also questions why the numbers entering mental asylums increased post-Famine at a time when the general population was decreasing.

Despite an abundance of official documentation directly relating to the Famine, studies in earnest only began in the mid 1990’s and this historical reluctance to tackle the subject also needs to be questioned.

Atlas of the Great Irish Famine is the most comprehensive examination of the Famine I’ve seen on a bookshelf and adds greatly to Famine studies. Much as it informs and educates I suspect it will inspire people to further examine the Famine in their own areas and within their own families. Well done to all involved in its production and to Writers Week for hosting such a thought-provoking event. 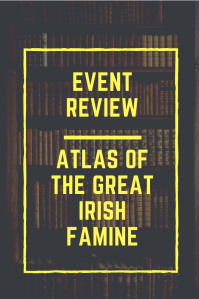